What is the difference between "Fundraisers" and Team Members?

At Chuffed.org, we want to give you different options to get people involved with your cause. Below is a breakdown of the different type of Team Member that you can have listed on the campaign page:

This will be the individual /representative who created the crowdfunding campaign. They will be able to edit and advocate all elements within the campaign editor.

These are people who will be represented on the campaign page as they are a part of the campaign team. However, they will not need admin rights to edit the page.

The "Editors" option gives multiple users admin rights to the campaign page, so that they can all edit and use the same page. This is useful if multiple people need to make changes to the same campaign page.

Our "Fundraisers" option will allow you to allocate several "fundraisers" their own sub-campaign pages. These individual fundraising pages will link back to the total on the main campaign page. Fundraisers will not have access to the financial information for the campaign. This option is useful to get several people to promote your campaign as they will be associated with the campaign. What's more, they will be given their own progress bar and target for them to manage. 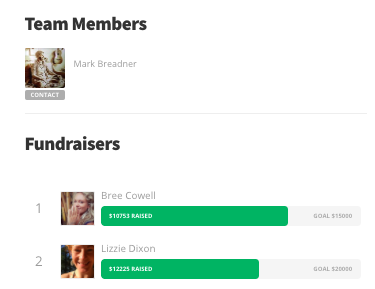 An example of the Team Members and "Fundraisers" options as shown in the "Rise as One" campaign. https://www.chuffed.org/project/rise-as-one-support-women-and-girls-to-dream-bigger-dreams

"2-Level teams" is an extension of this feature. People can raise funds as a group of fundraisers together. This could be useful if you were looking to have groups of people raise different amounts of funds for your cause. You can see an example of how 2-Level Teams works at the bottom of this campaign: https://chuffed.org/project/globalisocean-an-adventure-to-save-our-seas-in-india